A well attended day to celebrate the 125th anniversary of the opening of the Mechanics Institute was held on Saturday, 1 June 2019, between 10.00am and 3.00pm. The downstairs rooms of the NFHS and the upstairs rooms of the MG Car Club Hunter Region were open to the public allowing visitors to see the original features of the building that still remain. The celebration was yet another milestone in the history of the Lambton Mechanics’ Institute.

Constant rain did not spoil the event and some of the historic vehicles of the MG Car Club could be seen. The special Anniversary Cake was cut by our President Mel, members of the building trust, Ron and members of the MG car club Hunter Region at 11.00am in the NFHS rooms and a delicious morning was tea available to all those who attended. A display of books about Lambton and Newcastle could be viewed and all visitors received a souvenir booklet outlining the history of the front building compiled by our member Julie Keating. The visit by one of our patrons Sonia Hornery is always a pleasure.

The opening celebrations of the Lambton Mechanics’ Institute 125 years ago were much more extensive than those of today. The event was reported in the Newcastle Morning Herald and Miners’ Advocate on 2 June 1894 and is reported below. 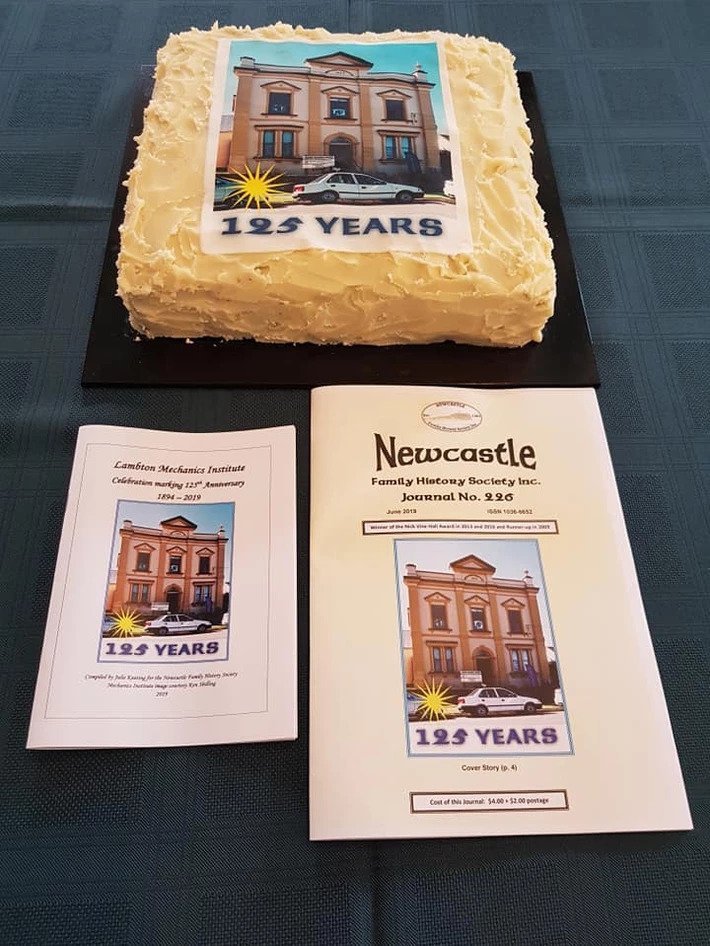 THE opening of the new Mechanics’ Institute building at Lambton was celebrated on Thursday evening, when an excellent vocal and instrumental concert was held in the Music Hall. During the evening members of the Waratah and Lambton brass bands combined, under the conductorship of Mr. W. Gibbs, paraded the principal streets of the town playing several selections. At the hour for commencement there was a fairly large attendance. Mr. T. CROUDACE presided, and opened the proceedings by expressing his pleasure at seeing such a number present, although he regretted that owing to the dull times, and the fact of several entertainments having taken place during the past few weeks, the hall was not crowded as it otherwise would probably have been in view of the laudable object for which they had gathered. He could only follow the example of Mr. F. B. Suttor, Minister for Education, when laying the foundation stone of the handsome new building just completed, and urge upon the townspeople to rally round the committee in making the institution a thorough success. He felt certain the benefits derived would far exceed the value of the small fee charged for membership. The committee had worked hard to secure the result, and richly deserved the thanks of the community for their laudable efforts. No one but themselves knew the trouble involved, and he heartily and sincerely tendered his thanks to the committee, who had succeeded in having erected one of the finest buildings of its kind in the Newcastle district. He announced the building as being “now open,” and urged all to become members as speedily as possible.’

The programme was then opened by Miss Evans, of Wickham, who played as an overture on the piano “Welsh Airs,” with variations. Mr. T. Evans sang “The Soldier’s Request;” Mrs. Parker. “Blind Girl to her Harp;” Miss Evelyn Williams,” The Better Land” (Jude), which was well received; Miss H. Lipman rendered “Margarita” (Lohr) in an artistic manner, and was compelled to respond to an encore. Messrs. Evans and Argust came next with the duet, “Love and War,” which was also encored, when the well-matched vocalists responded with “Albion.” Mr. D. Williams sang “The Bugler,” and Miss E. Williams and Mr. T. Dent, junr., rendered the duet “Excelsior.” Mr. A. Marshall recited an amusing piece, “ Mr. Smuggles at a public dinner,” which was effectively given, and in response to an encore the reciter gave “The Grave,” a short piece. The first part concluded with the male chorus, “Cromrades in Arms,” by the local choristers, who sang well, under the leadership of Mr. Henry Williams. The second part opened with a pianoforte solo, “Rigolette” (Edouard Dorn), by Mr. E. J. Payne. Mrs. T. Firkin sang “The Children’s Home,” and Mr. A. C. Argust “The Holy City” (Adams). Mr. Marshall followed with the recitation “How Bill Adams Won the Battle of Waterloo;” and Miss Lipman gave for her second number “The Old and Young Marie,” being enthusiastically applauded. Mr. T. Evans followed with “Home, Boys, Home;” and Miss Ethel Payne recited “Hearts’ Charity.” A duet, “In the Dusk of the Twilight,” by Mrs. Parker and Miss Salter was much appreciated, and Mr. D. Williams sang “The Village Blacksmith” with good effect. The Male Voice Party rendered “ We are the Young Musicians,” which was well received. In conclusion Mr. W. T. DENT, sen., moved votes of thanks to all who had contributed to the programme and the chairman, which were seconded by Mr. S. WILLIAMS and carried with acclamation. Mr. HENRY WILLIAMS and the CHAIRMAN responded. and this concluded a pleasant evening. At the close refreshments were handed the performers and committee by Mrs. W. T. Dent and Miss Williams.

The institute building just completed commands a fine view of the park, and is erected of brick at a cost of £573, contract price. The contractors, Messrs. A. and D. Sanders, and architect, Mr. P. Bennett, of Newcastle, have given satisfaction to the committee. The building has massive stone foundations. On the ground floor is a spacious entrance hall; library 27ft by 14ft, and opposite two game rooms 15ft by 14ft each. On the first floor is a large airy reading-room 35ft by 41ft.

The Newcastle Morning Herald and Miners' Advocate on 2 September 1903, reported that the wooden building in Howe Street, Lambton, was joined to the Mechanics' Institute after being moved to the new site using a team of bullocks. This building became known as the Institute Hall and is actually some years older than the front building.